As the Ukraine ceasefire kicks in there is ongoing tension in contested region. Although heavy shelling has stopped there is still regular small arms fire as reported by CNN. The above map shows the complex areas of buffers zones as collated by the BBC

Just before midnight, President Poroshenko ordered the commander of what Ukraine describes as its “anti-terror operation” to observe the ceasefire.

In a national broadcast from the military headquarters in Kiev, Mr Poroshenko expressed hopes that “perhaps the last chance [for peace] won’t be lost”, adding that agreements “must be honoured, and we are expecting that the ceasefire deal will be adhered to”.

The president said there was still “alarm” over the situation around Debaltseve, a transport hub where several thousand Ukrainian troops have been besieged by the separatists for days.

The rebels say they have completely cut off supply routes to Debaltseve, encircling the town. Ukraine denies the claim.

Donetsk rebel leader Alexander Zakharchenko said earlier on Saturday that he considered the Debaltseve area was not covered by the agreed ceasefire.

European leaders have warned Russia that it could face additional sanctions if the 13-point ceasefire agreement is not respected.

German Chancellor Angela Merkel said the deal offered “a glimmer of hope”, but warned: “It is very important that words are followed by actions.”

However, as reported in Al Jazeera a surge in fighting in the run-up to the ceasefire has cast doubt on whether it will be respected.

Al Jazeera’s Charles Stratford, reporting from Donetsk, told of heavy shelling in the rebel-controlled area earlier in the day.

He quoted a separatist commander as saying “things are going to go crazy tonight” just hours before the ceasefire kicked in at midnight local time.

He said at least seven Ukrainian soldiers were killed and 23 others wounded in Saturday’s violence.

“It seems that both sides are trying to consolidate their positions,” our correspondent said. 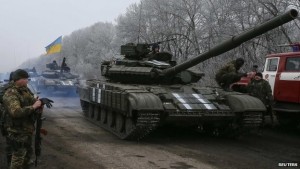