I’ve been using the following infographic from Deutche Bank for almost six months now. It’s still relevant from a geopolitical and business management perspective. However, what it doesn’t capture is the scale of the humanitarian crisis which has continued to escalate over the intervening period. 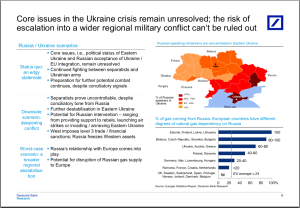 In this Reuters article today it is estimated that over one million are now classed as Internally Displaced Persons (IDPs). This number has more than tripled since August, figures from the United Nations Office for the Coordination of Humanitarian Affairs (OCHA) show.

The U.N. said an estimated 5.2 million people in Ukraine were living in conflict zones, of whom 1.4 million were highly vulnerable and in need of assistance as they face financial problems, a lack of services and aid, and harsh winter conditions.

“While it may be too early to call this a humanitarian catastrophe, it’s clearly progressing in that direction,” Denis Krivosheev, deputy director of Europe and Central Asia at Amnesty International, told the Thomson Reuters Foundation by email.

The provision of humanitarian aid was being hampered by pro-Kiev volunteer battalions that were increasingly preventing food and medicine from reaching those in need in eastern Ukraine, he said.

“Attempting to create unbearable conditions of life is a whole new ballgame… using starvation of civilians as a method of warfare is a war crime.” 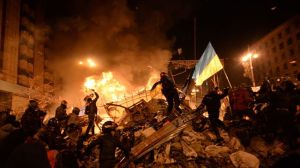 So whilst the highly dramatic images of the first half of 2014 are less prominent in the press the human dynamic has considerably worsened over the same period.

From an external perspective its difficult to guage what will happen next in the conflict. Whilst the risk of Ukraine overall descending into chaos seems somewhat limited the long term issues have yet to be addressed. Alexander Motyl a Ukrainian-American Political Scientist from Rutgers University has writtena fscinating piece for the Huffington Post around the comparison between the Donbas conflict region and America’s deep south.The Russia controlled depict the area as an aggrieved ethnic minority clamoring for nothing more than greater autonomy and cultural and language rights. Motyl argues this is far from being the whole picture.

The embedded differences make a resolution unlikely in the short term. Let’s hope we don’t head towards a meltdown of Balkan proportions the potential sadly is definitiely there.