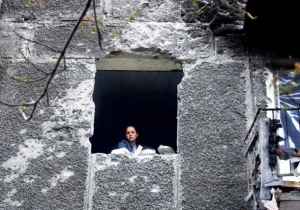 A woman looks through a broken window on September 22, 2014 in Debaltseve, after her building was damaged by rockets during an overnight shelling. The Ukrainian military said today it was preparing to pull back its guns from the frontline in the separatist east as a fragile truce with pro-Russian insurgents appeared to be taking hold. AFP PHOTO / ANATOLII STEPANOV